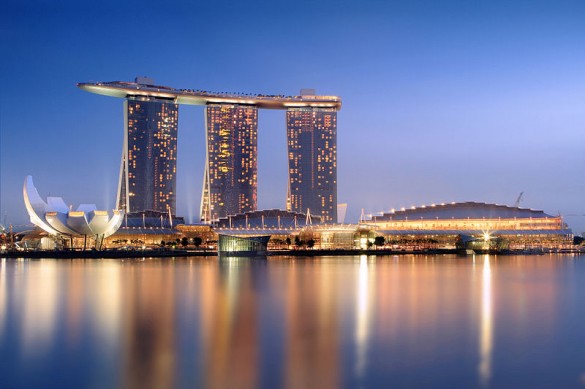 Ever seen an incredible hotel and resort on television and – with your mouth agape – wondered how much it must have cost to construct it?

With the price of construction reaching into the thousands of dollars per m2, it’s easy to understand why these monolith structures cost so much to construct and the ones mentioned below are the most expensive in history – so far.

Designed by Lebanon based architectural firm Dar Al-Handasah, the complex is also known as the Makkah Royal Clock Tower and features the world’s largest clock – said to be visible from 30km away, standing at a height of 530m and measuring 43m in diameter.

Consisting of three connected 55-storey towers and situated on an area of 38 acres, the Marina Bay Sands is billed as the world’s most expensive standalone hotel and casino.

Completed a year later than initially planned due to the escalating cost of materials and a shortage of skilled workers, the Marina Bay Sands was finally completed in 2010 and was designed by Moshe Safdie.

With construction overseen by Ssangyong Engineering and Construction, both the architecture and design of the resort were approved by feng shui experts. Imagine all the popular pokies games online you could play with $6.2bn!

Built by Malaysian conglomerate Genting Group, the Resorts World Sentosa complex consists of hotels, casinos, and a number of entertainment attractions such as the Universal Studios theme park.

With an integrated oceanarium – the world’s largest – which occupies an area of 20 acres and houses 100,000 animals of more than 800 species, the Resorts World Sentosa has continued to expand since it was initially completed in 2009.

Consisting of two high-rise towers both measuring 184m high, the Cosmopolitan of Las Vegas is a luxury casino and hotel resort based in the Las Vegas Strip.

Originally constructed by German banking company Deutsche Bank, the Cosmopolitan of Las Vegas was later sold to the New York based Blackstone Group for $1.73bn, less than half of what it cost to construct.

Despite its full gaming credentials and prime location, the Cosmopolitan of Las Vegas is still considered somewhat of a financial failure since originally going bankrupt in 2008.

As the 6th largest hotel in the world, the Wynn resort covers an area of 615 acres and was named after casino developer Steve Wynn.

Featuring many resort ‘firsts’ such as being the first Last Vegas casino to house a car dealership and integrating the room key and casino frequent-player card into a single card, the Wynn Resort has won several accolades such the Forbes five-star and Michelin five-star ratings.